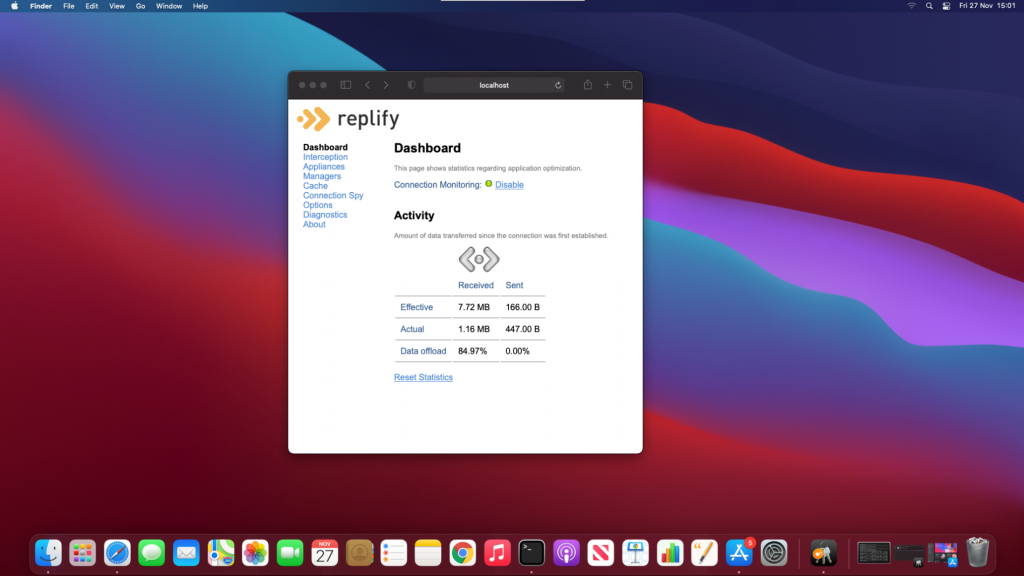 There has been a lot of excitement (in some quarters) about the recent release of Apple M1 processor. For those who aren’t in the know, this is a new processor that Apple have released and are using in their latest desktops and laptops. This marks a substantial change to the norm for Apple, and a shift from the previous Intel-based architecture. The M1 promises to deliver improved performance while using less power. Naturally this provides great benefits when used in battery powered devices such as laptops, phones and tablets.

Many Apple enthusiasts have been rushing out to buy the latest laptops with this processor. As some of those will be Replify Accelerator users, we were keen to ensure that Replify Accelerator was compatible with the new chip, hence we bought a Mac Mini which is now sitting along with a myriad of other devices in our server room.

We were confident that the new platform wouldn’t be a problem, as we’ve significant experience porting the software to different platforms, processors and operating systems. Our code-base has always been developed with portability in mind, and is one of Replify’s key strengths against our competitors.

Most of our users are using x86 platforms and use our clients for Windows, macOS and Linux. Other users avail of the same optimization features with the Replify Mobile Accelerator Client on their Android and Raspbian devices, that use the ARM platform. You can read more about the Replify Mobile Accelerator Client on our website.

To support ARM, we use the exact same code as on x86. It just happens to be compiled with a different compiler and packaged a little differently.

With the move to the M1 platform, Apple has included a new version of the Rosetta compatibility layer, that previously eased the move from the PowerPC platform to Intel. The ‘Rosetta 2’ layer makes it easier to support the new platform without having to make substantial changes to the applications that previously targeted the Intel platform. This means that the existing Replify Accelerator Client for macOS will work on both the Intel and M1 platforms.

When Apple drop support for the older processors, we will be able to quickly release a client installer specifically targeted for the M1 processor.

If you want to find out more or try Replify Accelerator on your shiny new Apple Macbook or desktop, please contact us at sales@replify.com.